THE RJO's Meet The Musicians Series 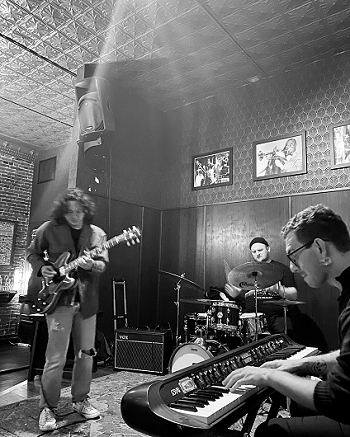 Recognizing and embracing our young musicians is a primary objective for The Reno Jazz Orchestra. The RJO created a scholarship for students enrolled in the College of Liberal Arts at UNR. In October, Max Case was the recipient of this year’s Reno Jazz Scholarship Award. His focus at UNR is Jazz Studies, and he has already begun playing with the 17-piece Reno Jazz Orchestra on select performances.

Well-versed in many musical styles, he has played in bands and ensembles that cover everything from the blues, jazz, folk and rock to classical. In his freshman year of high school, Max was in the Reno Youth Jazz Orchestra II band where he gained a tremendous amount of knowledge through the band’s leadership and guidance. Retired Colonel Vern Scarbrough and his wife Karen have been mentoring our youth since 2006 when they founded the Reno Youth Jazz Orchestra. What a gift to our community!

Music Runs In His Family

Max comes from a family of musicians, and grew up being exposed to many kinds of music in a house that was always lively with the sound of a piano or a record being played. His grandparents were also jazz musicians in Bellevue, Seattle, but it was his dad who introduced him to the music of artists like Miles Davis, Red Garland, and Oscar Peterson. However, it wasn’t until he began attending college that he really began to fall in love with and explore the music.

Max is pursuing a degree in jazz performance, but he was a history major first. However, it didn’t take long for him to switch degrees after seeing some of his friends perform in the university jazz ensembles. He enjoys jazz because of the spontaneity and the improvisational nature of the music that sets it apart from other styles. He also loves how deep the music can go. The technical, musical, historical, political, and social aspects of jazz offer an endless source of material and knowledge to be gained that keep him inspired.

Right now, Max tries to play as much as possible. He frequents Laughing Planet, The Loving Cup and Shim’s with either his own groups or in other people’s ensembles. Most recently, he played a sold out show of his arrangements of music by The Beatles at Reno Little Theater. Each new opportunity to perform gives him insight into the music as he continues to grow artistically.

Max touts the benefits of our area’s seasoned musicians. He says that having a group of talented and experienced players who are also kind and willing to play with him fosters a sense of community, and has been a source of inspiration for him. Playing with ensembles like the Reno Jazz Syndicate or the Ed Corey Trio (UNR’s professor of guitar) have been instrumental to his growth as an artist and very humbling experiences. He also enjoys being challenged by his peers and professors at school, and creating lasting relationships with them.

He definitely sees himself pursuing a musical career and expanding to New York. No matter what, we will always be proud of Max and his Northern Nevada roots. Max is excited to keep learning and growing as a musician here. The opportunities are outstanding for young musicians in our area!