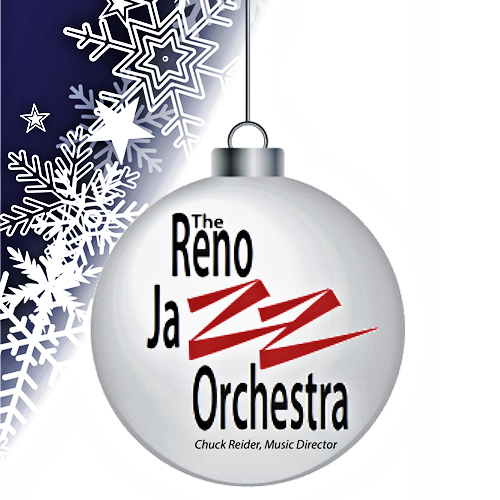 Last weekend the Reno Jazz Orchestra (RJO) celebrated the season with “Home for the Holidays” featuring the orchestra and four gifted hometown singers; Stephanya Barranti, David Wells, Kira Osborne, and Cliff Porter. It was a joy and honor conducting the orchestra with our guests in front of an audience. Though it was another year of uncertainty, it is our wish 2022 brings more opportunities to perform live and share the joy of jazz.

Improvisation is at the core of jazz and this year we continued to improvise ways to safely perform live. The RJO relied on the thoughtfulness of others to get through this year and we thank all of our supporters. During the uncertainty of the pandemic we can all “improvise” ways to provide light to those in need. The RJO over the years has performed at fundraisers for such non-profits as The Note-Ables Music Therapy Services, Tahoe Family Solutions, and Northern Nevada HOPES. There are so many great non-profits in our community that could use your “light” and I encourage all of you to support our non-profit community whether donating time or money. Let this year be a special year to bring hope to those in need.

Jazz celebrates the holidays so I thought I would give a bit of history on one of the most famous Christmas jazz performances, “A Charlie Brown Christmas”. Television producer Lee Mendelson recognized the impact Charles Schultz’s cartoon strip had on America and got on the phone to Schultz to discuss a project he had in mind. Schultz being a baseball fan recognized Mendelson from his documentary on Willie Mays. Mendelson noted that Mays was one of the best baseball players of all time and since Charlie Brown was one of the worst, he joked it was a natural follow-up. They began looking for sponsors for the show in April 1965 and when Coca-Cola agreed to sponsor, production began. The outline was completed in a few weeks after which both met with the animator. Schultz completed the script and Mendelson plotted out the animation. It was Mendelson, a jazz fan, that brought pianist Vince Guaraldi into the project after hearing Guaraldi’s hit “Cast Your Fate to the Wind”. Guaraldi brought in his trio bassist Monty Budwig and drummer Colin Bailey to record the first instrumental compositions.

Producer Mendelson couldn’t find the right lyricist for “Christmas Time is Here” so he wrote them himself in fifteen minutes. The special opened and closed with a children’s choir from San Rafael that was recorded at Fantasy studios. The choir director demanded perfection, but Schultz stepped in and said he wanted the “kids to sound like kids”. The sessions were quite long and the parents complained with some not bringing their child back for the second or third session. Each child was paid five dollars and one of those students went on to become an elementary school teacher. She sent Schultz a thank you letter on his 2000 retirement. She told each of her classes about the recording session and that after recording at Fantasy they went and got ice cream. Besides Guaraldi’s trio he hired many other musicians but did not keep track of who played what/when. It took several years of unraveling to figure out and give credit to those musicians.

This animated television special, first broadcast in 1965, was revolutionary in many ways. Mendelson wanted a laugh track, standard in those days for comedy shows. Schultz rejected a laugh track as he felt the audience should not be told when to laugh. Schultz won that battle. He also insisted that the focus on the special was the true meaning of Christmas and that Linus’ scripture recitation was the climax of the special. In the 1960’s less than nine percent of television Christmas shows included significant reference to religion. The project was completed only ten days before the premier and those involved felt it might be a disaster. It’s slow pace, ill-fitting music, and simplistic animation were the concerns. Producer Mendelson said "I really believed, if it hadn't been scheduled for the following week, there's no way they were gonna broadcast that show." As you know the rest is history. A Charlie Brown Christmas was voted into the Grammy Hall of Fame in 2007. CBS ran it each year from 1965-2000, ABC’s fortieth Anniversary showing was number one in its time slot. PBS broadcast it this year on December 19th. Now you know the rest of the story.

Looking for some great Christmas jazz? Check these recordings out:

As I leave you, I want to get back to Schultz’s idea of the true meaning of Christmas. Let’s all improvise a way to bring some much-needed light in the darkness of the pandemic. Find a charity to support and show them the light you have!

It is my hope that this Christmas Eve finds you safe and in the company of someone close. Merry Christmas and a Happy New Year!