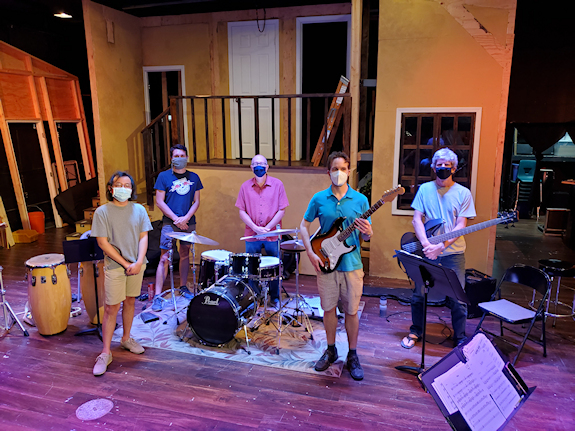 With the help of our sponsors the Reno Jazz Orchestra’s (RJO) Earth, Wind, and Fire (EWF) recording project is underway. Last month I provided an overview of the project and here is an update. We are slated to record thirteen songs, some you know and some might be surprises (I like surprises!). Last weekend the rhythm section; Joey Berger guitar, Angelo Monroy piano, Hans Halt bass, Andy Heglund drums, and David Gervais percussion laid down their parts for seven of the songs. Singers Lori Johnson and David Wells recorded “scratch” vocal tracks as rhythm sections recorded their parts. A scratch track helps the rhythm section know where they are in the song and can respond to the vocal. Later on after the whole band has recorded their parts the singers will return and record final vocal parts for the CD. Prior to last weekend’s session I met with the rhythm section at our rehearsal space, The Good Luck Macbeth theater, with masks on and socially distant to get the “grooves” just right for the recording sessions. 8/23 I met with the horn section leaders (Josh Dunlap trumpet, Karl Busch saxophone, and Dean Carter trombone) remotely to go over articulations. OK, what is that? Think of putting the accent on the right syllable. We wanted to make sure that all the horns agree on what notes to play short or long or with an accent. 8/25 was a visit with the saxophone section where they played their parts to proofread them and ask questions about each chart. Next was the trumpets and finally the trombones. The saxes will hit the studio 9/1. The trumpets and trombones will record in two separate rooms at Tanglewood Studios and that date is to be determined as of this writing.

Tanglewood owner Michael Eardley is excited about having each section record their parts on different days. This way he can isolate each performer which will make a more accurate recording of their performance. Why? When one performer’s sound is picked up on his neighbor’s microphone it is called “Bleed”. The bane of every studio engineer. That bleed actually degrades the recorded sound of the original performer making it difficult to optimize the sound as well as any edits to that performers part after the recording session. I had some challenges of my own while arranging several of the songs we are recording. Sheltering at home during these times gave me the opportunity to learn and use two pieces of music software I have had, but never had time to learn. Finale software is used to write or arrange compositions very similar to writing a score on paper. You can write your chart and it will play you what you wrote, very handy. Plus, as in Word you can copy and paste repeated parts as well as move them to other instruments. Nice, but it comes with a price. I will use a term first used in multi-track recording studios “ghost in the machine”. Where something sounds wrong, maybe a hum or a recorded part not sounding as intended and no one can figure out how to fix it. One ghost in Finale was the phantom dynamic changes. The trombones section sounds great until for some ghosty reason for three measures the volume drops by a bunch. Not even the helpdesk at Finale figured that out. No problem, I move the parts from Finale to my digital audio workstation (DAW). Think of the DAW as a way to polish up what was composed in Finale so it was no problem to bring the volume back up on the trombones. But the DAW has ghosts of its own. I was confounded by the next song I brought over to my DAW from Finale. For some crazy reason several of the instruments were way out of tune turning an EWF tune into space odyssey of gruesome proportions. After much stress and strain I finally figured out the problem and I will spare you the details. Some may say learning curve, but I am sure there is a ghost in my computer. At the end, the charts came out pretty good and were printed ready for the band.

If the above has peaked your curiosity and an interest in experiencing the recording process you can join us. We have put together a sponsorship for every budget and your support will help us complete the project. From coming to the studio during a session, a virtual experience of a recording session curated by yours truly, an exclusive album release party, to signed copies of the finished CD. Hey maybe even adding your voice to one of the songs! For more info visit http://renojazzorchestra.org/ewf/

A quick shout out to Washoe County and all the folks performing the COVID testing at the Livestock Events Center. We asked all our musicians to get tested and my experience was quite positive. Well organized and took me no more than forty minutes after arrival. Thank you all!

There are a couple more things I would like to share before I go. Our student jazz workshops were virtual this spring and the capstone event was a virtual performance instead of opening for an RJO concert. Director Dylan Tunstall-Coleman worked diligently to get both the AM and PM sessions to record parts at home and send them in to GPG productions, the same folks who produced our three virtual EWF recordings. When they get posted I will let you know, it was a kick for me seeing them.

Last week we were scheduled to perform with Grammy winning vocalist Diane Schuur in town and up at Sand Harbor. Those were canceled and we are hoping to bring her next year. Here is a little something to tide you over until then. Go to Youtube and check out Schuur singing “Everyday I Have the Blues” and “Until I Met You”. Both with the Count Basie Orchestra.