A Loving Tribute to Aretha Franklin

The Reno Jazz Orchestra (RJO) will present “The Queen of Soul, a Loving Tribute to Aretha Franklin” July 15th at the Hawkins Amphitheater as an Artown presentation and July 22nd at the Sand Harbor Trepp Amphitheater.  Both shows start at 7:30 pm.  The RJO firmly embraces Duke Ellington’s famous quote “There are two kinds of music. Good music, and the other kind.”  We chose this tribute to celebrate a true American original.  Aretha Franklin was a master of any style of music she chose to sing; jazz, gospel, soul, and even opera.  It was all good!  In fact, it was great.  When Franklin left us August 16, 2018 it left us all broken hearted, but her legacy is certain to stay in our hearts.  With that in mind our production is truly a loving tribute to the Queen of Soul as we share her music from her first recordings as a jazz singer, some of her greatest hits, and of course gospel.

At the tender age of eighteen Franklin began her recording career at Columbia Records with the 1961 album “Aretha: With the Ray Bryant Combo”.  She recorded nine albums at Columbia but none of them caught fire and it was not until she moved to Atlantic Records and recorded “I Never Loved a Man the Way I Love You” in 1967 did she make it on the Billboard charts at number two.  We all know her iconic recording of Otis Reading’s “Respect” as well as “Dr. Feelgood” and “Do Right Woman, Do Right Man”.  Atlantic Records recognized how to produce Franklin and from that point forward she was a super-star with forty-one albums, one hundred twelve charted singles, and seventeen top-ten pop singles.  She won eighteen Grammys including the first eight awards for Best Female R&B Vocal Performance.

Here is a sampling of our tribute.  We start with “For Once in a Lifetime”, a Broadway show tune from one of her first albums.  Next, “Evil Gal Blues” from “Unforgettable: A Tribute to Dinah Washington” was recorded in 1964 and sounds much more like her soul recordings.  Franklin remembered “I first heard Dinah when I was just a kid, back around the time she made 'Fat Daddy.' I never got to know her personally in those days, though she and my father were good friends. The idea of recording a tribute to her grew out of the way I've always felt about her.” We will visit the Atlantic early hits performing “Respect”, “Think”, and “Chain of Fools”.

We all know Franklin grew up in the Baptist church as her father, Clarence Franklin, was the minister of Detroit’s New Bethel Baptist Church.  Mr. Franklin was famous in his own right.  Known as the “million- dollar voice” he preached at churches across the country bringing along twelve-year old Aretha to sing.   Both gained celebrity which in turn brought many famous people to the Franklin home.  James Cleveland, Sam Cooke, Jackie Wilson, and Martin Luther King Jr.  all visited and became family friends.  We will be featuring three gospel songs: “His Eye is On the Sparrow”, sung at her funeral, “Mary Don’t You Weep” from her 1972 gospel album “Amazing Grace”.  Interesting note, a movie of those concerts was recently released after forty-six years!  A must see for all Franklin fans.  We finish the gospel portion with “Spirit in the Dark” and if that doesn’t move you, as guitarist Albert King would say, “You have a hole in your soul”.

Our second set opens featuring the band with tenor sax great King Curtis’ “Memphis Soul Stew”.  A bit of background here.  In 1970 Franklin released the critically acclaimed album “Spirit in the Dark” that met only modest sales figures.  Bill Graham had been trying to book Franklin at the Fillmore West, but the size of the venue could not cover her fee so it was decided to record a live album.  Instead of her regular band she hired King Curtis to lead an all-star back up band including Billy Preston on organ and Bernard Purdie on drums.  This album “Live at the Fillmore” released in 1971 introduced Franklin to a whole new audience of rock and roll fans that re-invigorated her career.  Curtis also released an album from the same March 1971 concerts that included “Memphis Soul Stew”.  Tragically, six months after those concerts Curtis was stabbed by a drug addict on his front step in New York City.  During the heated fight he grabbed the knife and inflicted a wound to his assailant, but Curtis was not to survive.  We hope to share the excitement and spirit of the Fillmore concerts.  We end our tribute with “Someday We’ll All Be Free” because Franklin was so much more than a singer.  She was an American icon that president Barack Obama said “helped define the American experience”.  She was the first woman inducted into the Rock and Roll Hall of Fame, a National Medal of the Arts, Grammy Lifetime Achievement Award, and the Pulitzer Prize Special Citation only to name a few honors.

The RJO welcomes four singers to bring Franklin’s spirit to life, three familiar RJO voices and one brand new one.  Let me introduce you. 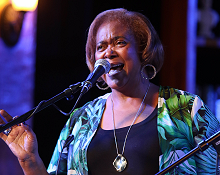 Pat Esters has been a featured RJO singer for many years and those who have heard her know why we keep asking her back.  She has been performing in Reno with her own group, the Mile-High Jazz Band, the Hamilton Street Band as well as backing the likes of Michael Bolton, Lyle Lovett, and Martha Reeves.  She performed with the Reno Phil and is featured on the RJO CD “Bring Me the Funk of James Brown”. 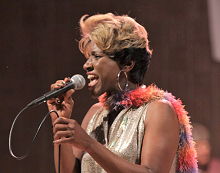 Our vocal arranger, Lori Johnson grew up under church pews in Washington D.C. and from age 5, all she remembers is music. Lori’s first choir directing experience was at the age of 11, and from then until now she’s been performing in and directing gospel choirs. She was an original member of the RJO’s 2012 production of The Jazz Soul of Porgy and Bess.  She was the choir director for all our gospel choir Christmas concerts and has been working with the Pat Esters Gospel Choir since its inception. 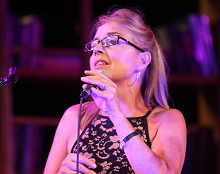 Carolyn Dolan has been entertaining audiences for over twenty-five years and crosses over many genres of music making her an in demand professional singer, harmonica player and performer. She has a gift of combining her passion of American roots music in her soulful vocal style, matched by the blues harmonica.  Esters, Johnson, and Dolan were featured in our 2017 production “Roots in the Blues”. 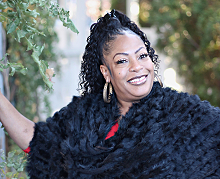 Our newest member is Margret Wrights.  Margret started singing gospel at 5 years old with brothers Jaeson and McArthur. Her mother, Beverly Butler, was instrumental in developing her talent and belongs to a family gospel group The Four With God. Margret has been in local R&B bands and in August 2018 started Margret’s Funk Band in honor of her late brother Mac.

Aretha Franklin is an American icon and we are so proud to bring you her music this summer.  Thank you Artown for inviting us to be a part of your Monday Night series at the Hawkins Amphitheater.  For more info about the concerts and to purchase tickets for our Sand Harbor concert visit the RJO's Events page.

Aretha Franklin live at the Fillmore West- Spirit in the Dark